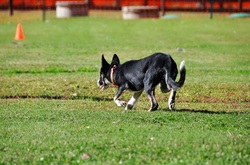 Quelle, formerly known as Belle, came to me from Barry Lambert of Stephenville, Texas in May of 2014.  Barry raised, trained, and trialed her, qualifying her for the 2014 USBCHA Sheepdog National Finals in Nursery.

Quelle is a big outrunning and quick flanking dog, who is growing into herself.  She has a good feel for her sheep, works with a great deal of heart, and does not quit.  She will work all day long, work just about any form of livestock, and still want to continue.  She is showing a lot of promise and has been a joy to work. 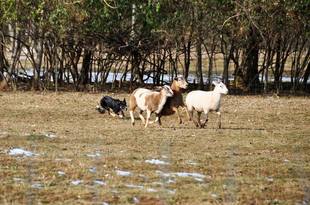 Quelle is my number one pen dog.  She is an invaluable asset when working trials (in the pens and at set out) and has no fear getting into small spaces with her livestock.  She is just as enthusiastic coming out of the crate for a days work as she is when she is called off for the day.  This little dog will run the entire show if allowed.

Quelle's dam was a Nusery dog run by Allen Mills whose lines go back to Derek Scrimgeour's Sweep and (Black) Ben.

Quelle made her USBCHA Open Debut at the December (2015) Long Shot Double Lift Trial.  While we were not in the placements, she completed her double lift spectacularly (timed out at the shed) and it will be fun to see how she grows and takes on future challenges on the trial field.

UPDATE (4/14/2017)
"A little over 3 years ago, I saw an ad with a Nursery dog for sale. And almost 3 years ago, I brought that amazing little dog home with me. Quelle (formerly Belle) was one of my best decisions. She taught me so much in our short time together. A true partner and an amazing working dog, in the words of her trainer and former owner - so biddable it hurt. She lived to work and was always looking for livestock.
Within 24 hours of falling ill, she left this world. She stayed long enough to say goodbye and went quietly at home. We may never know what stole this little star from us, but she will always be remembered.
Run free, run fast, run true. I will see you again my sweet girl." 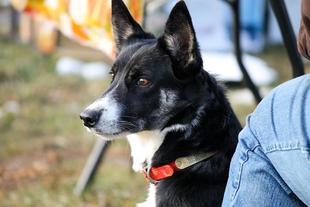 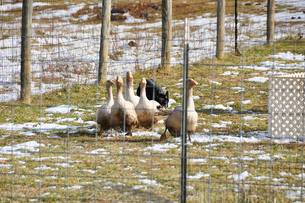