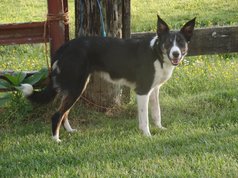 It was a long road for Lisa to land here.  Lisa was bred by Janet Beale of Astra Sheepdogs in Scotland.  As a pup she was sold, then bought back by Janet at 16 months old, to be sold to a hill farmer named Alan Wilkie.  Lisa was sold to Nancy Obernier in the US and again sold to Pam Helton before her final sale to us.  Lisa has been around the world and had many adventures, including qualifying for and competing in the 2012 Scotland Nursery National Finals.  She ended just 3 points behind the winner.  She and Mr. Wilkie also won the Central Scotland Nursery League Championship by being the most consistently placed team on the central circuit.

Lisa is a one fast little dog.  She is quick to go out and fast on her flanks, but possesses great feel and beautiful pace.  She is incredibly keen to work and is one intense girl.  She is a beautiful driving dog and a fantastic chore dog.  She is an asset to our team and we are only just getting to know one another. 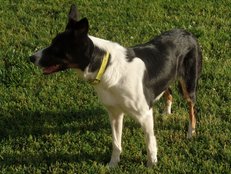 Lisa's pedigree is full of impressive dogs.  Her father, Brock, is a litter mate to James McGee's World Champion Becca.  Brock was more than just Becca's brother.  He was an accomplished trial dog, winning the Irish National Shepherd Trophy in 2006 and 2007.  He was imported to the USA, where he passed away in August of 2015. 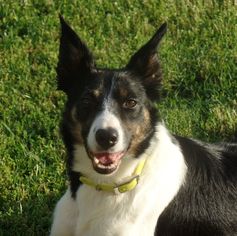 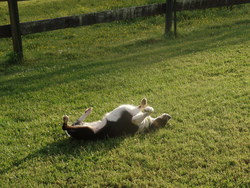 **Lisa and I have been having a lot of fun, but time constraints have limited our trial experiences together.  She is currently running in USBCHA Open Sheepdog trials.

VIDEO 1 was shot in Scotland when Lisa was originally sold as a 16 month old.

VIDEO 2 was her 3rd place run at the 2012 Scottish Nursery Finals.