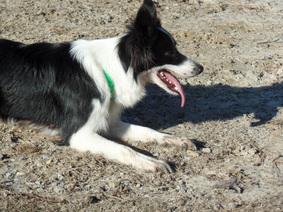 The first puppy at SKYFALL is a puppy no longer.  Eve has grown into a very promising dog.  She is very keen, a serious and intense dog on livestock.  She can spot sheep at an impressive distance and, when first started, showed the beginnings of a natural outrun.

Eve handles the pressures of training with ease; remaining enthusiastic about her work.  She has not shown any signs of backing down when against more difficult stock.  She is very forward with good feel.  Eve is a lot of fun to train and to work, willing to work sheep and goats.  She has no interest in birds at this time. 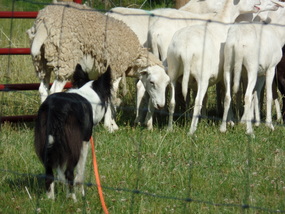 Maid is sired by Bill Reed`s Glen, the 2013 National Cattledog Association`s Reserve Open Champion, and is the grandaughter of Bill Reed's Anne, a two time USBCHA Cattledog National Final's Reserve Champion.  Maid placed in the top ten at the 2014 NCA Cattledog Finals in the Nursery Division.

Dec 2018:  Eve has moved up to Open Ranch in USBCHA trials.  She took 5th place at her second trial this winter.