**PHOTOS belong to Karolina Dyszy of Cemig Sheepdogs and That'll Do Photography.  We will be replacing these photos with photographs of our own.**
​​
Sex: Male • DOB: 5/20/2015 • Started by: Karolina Dyszy
Breeder: Kevin Evans  • Color & Markings:  Black Tri, White Chest 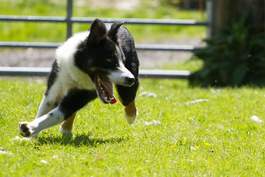 Dex comes to us from Whales where he was bred and started.  He is a high energy, fast and agile boy who is loaded with keen interest and deep desire to work.  He has style, a little eye, and is a forward moving and fast flanking dog.  He is quite steady on his drive and possesses a natural cast to his outrun.  This young dog is still developing, but showing a great deal of promise for the future.  He has plenty of power and will grip when required.  He also appears to be willing to work any form of livestock. 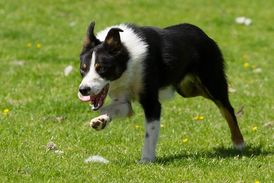 Dex's pedigree has no shortage of impressive and accomplished dogs.  He is sired by Kevin Evan's All Welsh National Nursery Champion Moss.  His mother is the daughter of Mathew Watson's 2010 English National Champion Milo.  The rest of his pedigree is equally impressive, including notable dogs such as:  Dalziel's Joe, Henderson's Sweep, Dick Roper's Cap and Tom, Cropper's Sid and Dan, and Scrimgeour's Ben.

Dex is really coming along in his training.  We have high hopes for this boy. 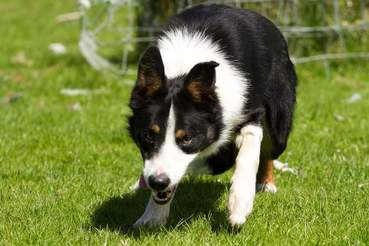 Dex is one keen and fast dog.  He is in training and we have high hopes for this dog's future.

VIDEO 1 is the video shot by Dex's trainer while still in Whales when he was for sale.